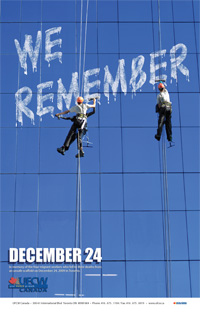 Toronto - January 17, 2013 - The call for justice has moved one step further in the wake of a Toronto Christmas Eve tragedy that killed four construction workers and left another with serious injuries. An Ontario judged has ruled that the Metron Construction Project Manager Vadim Kazenelson must now stand trial for criminal negligence causing death. In 2009, a crew being managed by Kazenelson fell 14 stories when the makeshift scaffold they were working on collapsed. None of the victims were wearing safety belts, nor had received comprehensive safety training.

In July 2012, the Metron company itself pleaded guilty to criminal negligence and other charges, but it and its owner were sanctioned with only fines. The Crown has appealed that ruling as too lenient.

In the meantime, Kazenelson, the project manager, will now stand trial and could face imprisonment for failing to insure safety protocols at the worksite. The charge comes under
Bill C-45, an amendment to the Criminal Code that allows companies and their supervisors to be criminally charged in the wake of a workplace accident, with potential sanctions including jail time for company owners, officers and supervisors.

"Negligent employers and their representatives must be made to understand that money alone cannot paper over their negligence," said Wayne Hanley, the National President of UFCW Canada. "We support the Crown's appeal that the earlier sentencing of Metron's owner was too lenient, and that if convicted, the project manager should also face the severest sanctions."

UFCW Canada is a long time advocate of the "Kill a Worker, Go to Jail" campaign. UFCW Canada representatives also appeared at a special Ontario inquiry into workplace safety, following the deaths of the Metron workers. UFCW Canada's National Workplace Rights Committee has also created a "We Remember" poster that is distributed annually to commemorate the Christmas Eve tragedy.