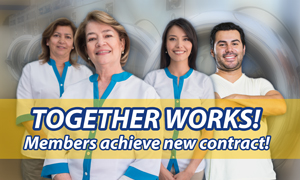 Mississauga, Ont. – May 23, 2018 – Improvements to wages, benefits, and pensions are among the gains achieved by UFCW Canada Local 1006A members working at the Unifirst Dunwin and Orbitor locations, two laundry facilities located in Mississauga, Ontario.

As part of the Unifirst workers’ newly-ratified contract, the old two-tier wage scale has been eliminated and a majority of members will see their wages increase by 16 percent over the life of the agreement. The contract covers 110 workers and runs until March 2022.

Other highlights of the agreement include:

“I want to thank our negotiating committee for their hard work and dedication in representing the interests of members at Unifirst,” says UFCW Canada Local 1006A President Wayne Hanley. “As the leading union for laundry workers in Ontario, we are proud to achieve positive change for the hard-working men and women at Unifirst,” he adds.