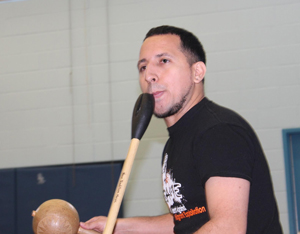 Toronto – March 16, 2018 – Community activist Ruben Esguerra, also known by his stage name, New Tradition Music, has been nominated for a 2018 Juno Award in the category of World Music Album of the Year.

His latest album, A New Tradition – Vol. 2: Return of the Kuisi, blends traditional West African, Afro-Cuban, and Columbian music with more contemporary sounds such as hip-hop and spoken word.

Ruben has been actively involved with UFCW Canada since joining Students Against Migrant Exploitation (SAME) over six years ago. He has since gone on to become a founding member of the UFCW Canada-led Solidarity Squad, and has been instrumental in the production of both volumes of the award-winning music compilation, 100 Years of Solidarity.

“UFCW Canada has been an amazing supporter of my work,” says Ruben Esguerra. “I have had the pleasure and luck to work alongside this great union for a number of projects that have allowed me to express myself through my art, develop as an artist, and advocate for workers’ rights,” he adds.

UFCW Canada would like to congratulate Ruben on his nomination and wish him the best at the 2018 Juno Awards – which take place on March 25 at 5 p.m. (PST)