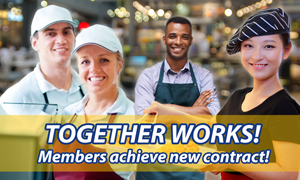 In addition, General Help rates will increase substantially with new “minimum wage plus” language. The contract provides for a 45 cent per hour increase, over and above the announced $15 increase, beginning in January 2019.

Full-time employees will receive four personal/sick days per year, inclusive of the two mandated under the Employment Standards Act (ESA). Part-time employees can use their two emergency leave days, with no doctor’s notes required, for school closures affecting their children. The contract also recognizes Easter Monday as a paid holiday now.

Improvements to the Sunset Clause remove discipline records 12 months from the date of issue. As well, the committee achieved the deletion of mandatory inoculation language. The employer will now pay 50 percent of the cost of the negotiating committee’s lost wages, as well as the cost of printing contract books. And each employee will receive three uniforms from the company. In addition, the employer will contribute $300 per year, up from $250, toward the Local 175 Training & Education Fund.