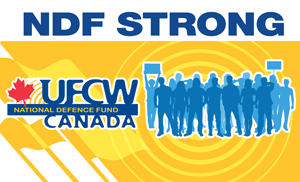 The 220 members at the Institute manage Quebec City’s public library network. They joined the NDF in order to gain the protections of Canada’s leading strike and lockout resource.

"We are very proud of the members at the Canadian Institute of Quebec for taking a bold stand and voting to join the NDF,” says UFCW Local 501 President Alain Lachaîne. "With the extra strength and backing of the NDF, our union is confident that the members will be able to hold strong in future negotiations with their employer,” Brother Lachaîne adds.