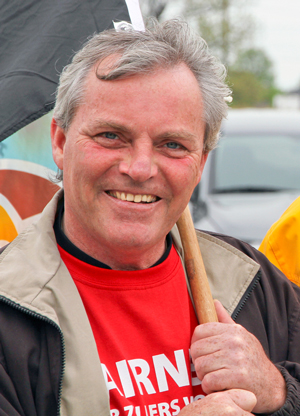 Toronto – June 6, 2017 – It is with heartfelt sadness that UFCW Canada announces the passing of our dear friend and brother, Stan Raper, who passed suddenly and unexpectedly on June 5. This news comes to our union and the entire agriculture worker community with enormous shock.

A staunch labour and farm worker advocate who worked on behalf of domestic and migrant agriculture workers for more than two decades, Stan was born in Fort Frances, Ontario in 1961. As a teenager and high school student, he learned first-hand about the challenges faced by farm workers when he worked part-time as an agricultural worker at a field and greenhouse operation in Coldwater, Ontario.

From 1994-1999, Stan served as the Canadian Co-ordinator of the United Farm Workers of America. Then, in 2000, with the help of UFCW Canada and the Canadian Labour Congress, Brother Raper launched the Global Justice Caravan Program, traveling throughout Ontario’s farm country in a mobile RV documenting the plight of migrant agriculture workers labouring in the province.

Stan went on to become the National Co-ordinator of the Agriculture Workers Alliance (AWA) in 2006, where he assisted with the opening of additional agriculture worker support centres in Ontario, Quebec, and British Columbia, and helped build the AWA into the largest agriculture workers’ organization in North America, with more than 14,000 members across Canada.

Stan also worked with faith and social justice organizations on a number of initiatives aimed at improving the lives of agriculture workers, including reports and projects with the North-South Institute, the Law Society of Ontario, and CERIS.

“Stan will always be remembered for his dedicated service and unwavering, lifelong commitment to advancing the rights of agriculture workers in Canada,” says Paul Meinema, the National President of UFCW Canada. “His tireless work over the last two decades helped make our union stronger, and he will be deeply missed by his UFCW colleagues and all of the workers, particularly agriculture workers, that he helped over the years.”