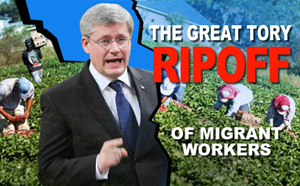 As of December 9, Minister of Human Resources and Skills Development Canada Diane Finley announced changes in regulations whereas seasonal migrant workers have essentially been disqualified from applying for parental or compassionate care benefits.

Workers under the Seasonal Agriculture Workers Program (SWAP) for example, have been paying into the Employment Insurance (EI) fund since the program’s inception in 1966. However, workers did not begin to collect benefits until 2003; only after advocates informed workers that they too had the right to parental or compassionate care benefits benefit from this program (as this information was never provided to them by the government).

This prompted many of the Agriculture Workers Alliance (AWA) support centres across the country to submit thousands of applications on behalf of migrant farm workers in subsequent years. This allowed migrant agriculture workers to collect a fraction of what the government has collected from these workers since 1966. Keep in mind that this does not include the other Temporary Foreign Worker programs that have also sprung since the start of the SAWP.

Migrant agriculture workers also pay into the Canada Pension Plan, and pay income taxes when their income surpasses the thresholds stipulated by the Income Tax Act. Once more, the benefits received by the workers are just a fraction compared to the amount of money that gets collected by these two programs and that go to the government coffers.

At the end of their working season and visa, migrant and temporary workers have always been excluded from the collection of regular EI benefits (benefits paid when a worker when their employment is interrupted). The only benefit migrant workers received for the millions they paid in EI premiums were parental, maternity and compassionate care benefits under the same regulations as other workers who pay into EI. That equal access has now been removed.

Most vulnerable workers left with no choice

The Conservative government’s attack on the most vulnerable workers in this country is a ruthless, cynical, demoralising blow to a group of workers who continue to be exploited and abused like commodities. The fact that there were never any consultations or input from organizations and communities working with migrant workers before the government imposed the new regulations is not in keeping with Canadian values.

UFCW Canada is Canada’s largest private-sector union with more than 250,000 members across Canada. For more than two decades UFCW Canada has led the campaign for enhanced labour, workplace and safety rights for migrant workers. In association with the Agriculture Workers Alliance (AWA) UFCW Canada also operates ten AWA centres across the country to serve domestic and seasonal agriculture workers.