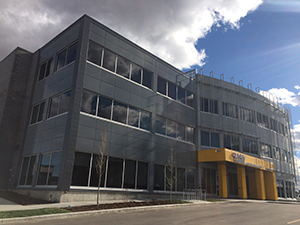 Calgary – May 8, 2017 – Members, union representatives, company officials, Alberta MLAs, and other distinguished guests were part of a large crowd who attended the ribbon-cutting ceremony on April 25, marking the official opening of the brand new Calgary union office – affectionately dubbed the UFCW 401 Members’ Centre.

More than 300 guests came from across North America to help 401 members, officers, and staff celebrate its opening. Busses were also arranged for members who wished to join in the fun from other cities and towns on their own time.

Also in attendance were Chief Leonard Bastien and his tribal dancers. Chief Bastien (Leonard Weasel Traveller) blessed the building and spoke passionately and eloquently about the invaluable contribution of unions in this country, particularly UFCW Canada Local 401. It was truly humbling and an honour to listen to Chief Bastien talk about his vision for social justice and the gratitude he expressed for the work Local 401 members and leadership have done in the advancement of workers’ rights. The dancers wowed the crowd with nearly an hour of beautiful traditional dancing.

Seeing many NDP MLAs in attendance, Chief Bastien took the opportunity to praise the NDP government’s efforts to consult with First Nations Peoples.

International President Marc Perrone and National President Paul Meinema each brought greetings and offered kind and inspiring words about all that Local 401 has contributed over the decades.

Among the NDP MLAs who were able to attend, Minister of Finance Joe Ceci brought greetings and offered congratulations to the members and staff on the new Centre.

When talking to members, officers, and staff alike, it became apparent that this day was all about the 401 members. Members felt very comfortable and welcomed in their new building – like finding a new home. As one member put it, “it’s a beautiful monument to the greatness of the 401 membership and they are very excited to have many years of fruitful activities and events within it.”

You can view a photo gallery the event here. To find out more news and information about UFCW Canada Local 401, go to www.ufcw401.ca.