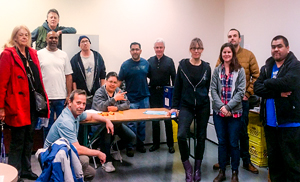 "The sad reality is that this type of work is often precarious and poorly paid," says UFCW Local 1518 Executive Assistant Kim Balmer. "During bargaining, our higher paid members were willing to forego a higher wage increase to ensure that their lesser paid co-workers came up to $15 an hour or greater. They wanted to ensure the custodians and dishwashers would make a living wage."

The new contract also features language that will promote more full time positions as well as enable workers to move to higher paid classifications. The bargaining committee was also able to achieve strong health and safety language. “In many cases these members deal with people suffering from untreated mental illness and addiction. They’re often faced with folks who can be violent. And all this is complicated by the opiate crisis in British Columbia, which means they’re also dealing with folks who are overdosing,” says Sister Balmer. “So we made sure we got the language to help deal with serious incidents and aggressive behavior.”