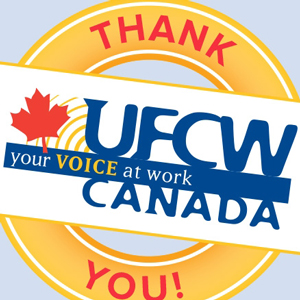 Toronto – December 7, 2016 – The contributions and fundraising initiatives of UFCW Canada throughout its 31-year partnership with the Leukemia and Lymphoma Society of Canada (LLSC) were commemorated on UFCW Canada Thank You Day, held this past Monday, December 5.

As part of this year’s Thank You Day, both UFCW Canada and the LLSC celebrated the contributions that UFCW Canada activists have made to the LLSC’s life-saving efforts to fight blood cancers through over three decades of fundraisers, events, and Light the Night Walks.

Throughout the day, activists shared videos, memes, and infographics on social media detailing the important fundraising work that UFCW has done in support of the LLSC’s research to find a cure and better treatments for leukemia, lymphoma, Hodgkin's disease, and other blood cancers.

Activists also shared a special interview that the Society conducted with UFCW National President Paul Meinema, exploring UFCW’s decades-long efforts to support blood cancer patients and their families through our work with the LLSC.

In addition, representatives from the Society visited various UFCW Canada Local Unions across the country to say “thank you” for our union’s commitment to ending blood cancers, and to highlight local success stories of blood cancer survivors.

Since adopting the LLSC as our charity of choice in 1985, UFCW Canada and its Local Unions have raised over $36 million for the life-saving efforts of the Leukemia and Lymphoma Society of Canada.