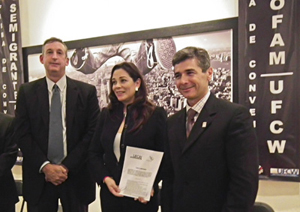 UFCW Canada and Mexico institution CONOFAM have signed a new agreement to protect the labour rights of Mexican migrant workers in Canada. CONOFAM (the National Coordinator of State Agencies for Migrant Affairs) provides migrant information and advocacy services throughout 29 of Mexico states, including the Federal District of Mexico. CONOFAM's mission is to strengthen support services for migrant workers in their own home communities, as well as at their work locations outside of Mexico.

The agreement contains "Know Your Rights" training workshops in Mexico; a series of forums on the subject of temporary migration; the development of an international working group on transnational migration issues; and an assistance component, that includes providing services through the Agriculture Workers Alliance (AWA) network of support centres in Canada.

UFCW Canada has been working closely with Mexico's federal government executive and legislative bodies since 2007. But state level institutions in Mexico are the typical providers of direct services to migrant workers in matters involving education, health, and social services. Over the past four years, UFCW Canada has been a signatory to similar mutual collaboration agreements  with states of  Tlaxcala, Oaxaca, Guerrero, Michoacán, and the Federal District of Mexico; jurisdictions whose citizens make up a significant proportion of migrant workers in Canada.  The new agreement with CONOFAM will significantly expand UFCW Canada's alliances with other states.

While UFCW Canada looks forward to strengthening its relationship with the federal government in matters of migration, the added state agreements through CONOFAM are definitely also an advancement.

UFCW Canada is the country’s largest private-sector union and has led the fight for the workplace rights and safety of migrant workers for more than two decades. In association with the Agriculture Workers Alliance (AWA), UFCW Canada operates ten AWA support centers across the country.