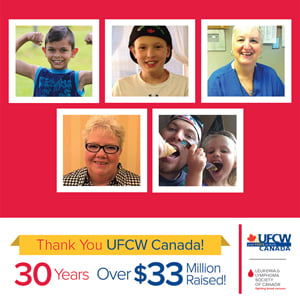 Toronto – December 4, 2015 – The contributions and fundraising initiatives of UFCW Canada throughout its 30-year partnership with the Leukemia and Lymphoma Society of Canada (LLSC) will be commemorated on UFCW Canada Thank You Day - December 7.

Throughout the day, both UFCW Canada and the LLSC will be celebrating the contributions UFCW Canada members have made to the LLSC in over three decades through fundraisers, events and Light the Night Walks.

Since adopting the LLSC as the charity of choice in 1985, UFCW Canada members have raised over $33.8 million for the life-saving and life-changing efforts of the Leukemia and Lymphoma Society of Canada.