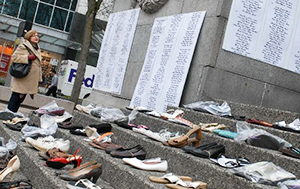 Toronto – November 28, 2015 – UFCW activists will be participating in Shoe Memorial vigils across the country on December 6th  –  the National Day of Remembrance and Action on Violence Against Women. The Shoe Memorials are displays of donated women's shoes to commemorate the 14 women students at l’École Polytechnique de Montréal who were killed in a gender-based act of violence on December 6, 1989. The memorials are also a reminder of the thousands of other women in Canada who have been victims of misogynistic violence and murder.

This year, UFCW Canada and local unions will once again actively participate in the co-ordination of Shoe Memorial initiatives across Canada. Shoe memorials do more than propel the public to donate their gently worn shoes to women’s emergency shelters. They propel the donor to think about the violence that goes on in their communities, every time they look in their closet.

Think about taking the time on December 6, to visit your local Shoe Memorial or vigil and create a teachable moment in history that empowers a survivor of violence, and that shares your commitment to ending violence against women in Canada. To download posters for December 6, 2015 - National Day of Remembrance and Action on Violence Against Women, click here.

December 6, 1989 Luncheon in honour of National Day of Remembrance

For more information on the Shoe memorial initiative or to locate other Shoe Memorial locations across Canada go to www.shoememorial.com. Find out more information about UFCW Canada’s work to eliminate gender-based violence by checking out www.ufcw.ca/women.