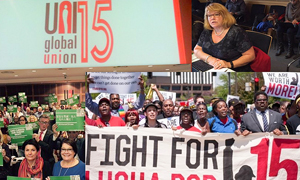 “At a time of rising inequality and growth in precarious insecure work, it’s vitally important for workers across the globe to coordinate their efforts in fighting for good jobs, fair wages and scheduling. It’s important that Canadian retail and food workers are part of the global discussion and strategy to achieve fairness and justice for workers at home and around the world,” said Sawyer, who is a member of the UNI World Executive Board.

Sawyer said workers globally needed a pay raise and that a $15 minimum wage should come with access to guaranteed hours of work. The latter will protect workers from employers like Walmart, who cut hours after pledging to increase wages at its U.S. stores. She further called for increases to minimum wages to be applied to those who are already in wage progressions, to ensure their experience is taken into account. Sawyer called for UNI Commerce and other sectors to develop standards that will go along with the call for a $15 minimum wage.

“Workers need a raise but they also need guaranteed hours to ensure their quality of life actually improves,” she said. “The best way to achieve those guaranteed hours is through unionization and collective bargaining.”

Sawyer spoke about the achievements of Local 1000A members at Loblaws Great Food and Superstore in securing guaranteed hours, part-time clerks in wage progressions seeing wages go up as minimum wage goes up, and achieving an increased period of notice for their work schedules.

Under the recently ratified Loblaws Great Food and Superstore agreement, more part-time workers have access to guaranteed hours to improve their quality of life. This means many more workers receive 28, 24, 20 hour guarantees based on length of service and number of part-time employees in their department.

Part-time workers are also participating in a pilot program that provides an additional week of notice of their work schedule.

The pilot started in late August. A decision will be made on the full implementation of this pilot between the 8 to 12 month mark based on the program’s success.

These scheduling improvements were some of the many gains achieved in the negotiations. In addition, Sawyer noted that legislative changes are needed to raise the standard for all workers, and one way to raise retail workers up is through legislated allocation of hours to full-time work, guarantee of minimum hours, and minimum notice period for work schedules.

“There is still a lot of work to be done in Canada and globally to halt the rise of precarious work, and to reduce the significant uncertainty and insecurity far too many workers are experiencing today, particularly in non-unionized workplaces."