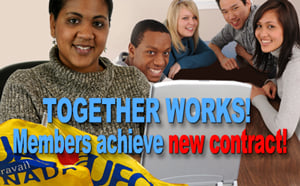 Montreal – October 5, 2015— Members of UFCW Local 500 at the Archambault call centre have ratified their very first collective agreement, after the sale of the Archambault group.

Québécor announced on May 19th that it had sold the chain to a company within the Renaud-Bray group. The Competition Bureau approved the transaction on September  4, 2015.

Under the new collective agreement, schedules are published at least two weeks in advance, and members are able to exchange shifts to make the work/life balance easier. The parties also agreed to schedule two shifts of working hours, spreading the hours fairly among the members. Workers will also be able to indicate an availability of only eight hours greater than the number of hours they want to regularly work per week.

Other benefits that have been agreed to include:

“This is a very positive first contract,” says UFCW Local 500 President Antonio Filato. “The bargaining committee showed solidarity in defending the quality of working conditions for our workers. Congratulations to everyone!”