Up for Debate addresses women's issues at Toronto panel 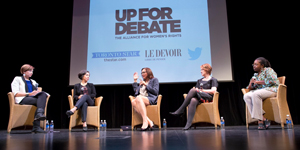 Toronto – September 25, 2015 – More than 500 attendees gathered at the University of Toronto for a live-streamed panel discussion on women's issues, and to hear what some of the federal party leaders had to say. It has been over three decades since the last time federal party leaders had any public forum discussion on women's issues.

Leaders of four out of the five major federal political parties — Thomas Mulcair, Justin Trudeau, Elizabeth May and Gilles Duceppe — took part in pre-recorded interviews with  journalist Francine Pelletier,  who asked leaders questions on women-specific issues such as violence against women, childcare, and gender inequality in Canada.

Meanwhile, despite repeated invitations over the past few months, Conservative leader Stephen Harper declined to participate and be interviewed.

Among the highlights from the event, NDP leader Thomas Mulcair outlined the need for the creation for more child care spaces, and provided the most concrete plan of doing so. He also spoke on the need to address policies in Parliament as a means to eliminate sexual harassment on Parliament Hill.

The video interviews were followed by two panels. The first panel featured experts who rendered critical analysis of the leaders’ comments and their parties’ platforms. The second panel focused on the leaders' influence in the public and via the media regarding women's issues.

Up For Debate is a UFCW Canada-supported campaign to make women's rights and gender equality key issues in the 2015 federal election campaign. To find out how you can get involved, click here.