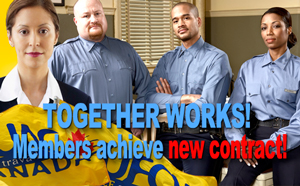 Winnipeg – June 10, 2015 – UFCW Canada Local 832 members working at Securitas in Winnipeg and Brandon, Manitoba have overwhelmingly ratified a new collective agreement. Securitas provides security services for a variety of businesses and industries around the world.

As part of the new agreement, members will see improvements to vacation language and the safety shoe allowance, as well as the introduction of a seniority premium based on client approval.

Securitas also recently worked with UFCW Local 832 to help lobby the Manitoba provincial legislature to enact a new minimum wage rate for security guards. As a result of these efforts, security guards across the province will receive wage increases.

"This new contract is a huge victory for workers at Securitas," says UFCW Canada Local 832 President Jeff Traeger. "The work we have achieved collectively will go a long way in protecting members who put their lives at risk everyday in the security sector," Brother Traeger adds.