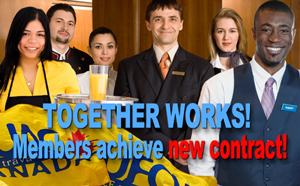 The OTG members work as cooks, servers, bartenders, utility workers, and cashiers in a variety of restaurants at one of the largest and busiest airports in North America.

The new three-year contract provides a grievance procedure and enhanced job security to members, as well as annual wage increases of three percent per year and four additional sick days per year.

The employer will now pay for parking for all full-time employees, and the contract maintains the workers' existing RRSP plan.

"Congratulations to the OTG members on achieving an excellent first contract," ‎says UFCW Canada Local 206 President Wayne Hanley. "Thanks to their hard work and determination, the members successfully came together to secure a fair deal and a better future for themselves and their families," Brother Hanley adds.