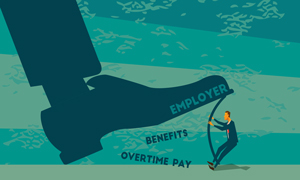 Toronto – April 13, 2015 – A new report reveals how some Ontario employers cheat workers out of basic entitlements such as overtime pay, and in some cases minimum wage, by claiming the workers are not covered under the Employment Standards Act.

The report, Still Working on the Edge, from the Workers Action Centre in Toronto,  details how some employers resort to anti-worker tactics by sub-contracting work, by hiring through temporary employment agencies, or  by misclassifying employees as independent contractors in order to avoid providing workers with basic entitlements.

The report also noted that 41 percent of employment in Ontario now lies outside a standard, full-time permanent employment relationship with a single employer — leaving non-union part-time, as well as self-employed workers vulnerable to abuse from employers.

The 71-page report also details unscrupulous employers who wrongfully classify precarious workers as independent contractors. Independent contractors are not designated as employees under the Ontario Employment Standards Act and do not receive ESA entitlements. Employers often use this tactic to avoid having to provide overtime pay, paid leave and benefits. To counter this, some of the report’s recommendations include broadening the Employment Standards Act's definition of "employee" to include workers classified as independent contractors, as well as making employers liable for workers’ wages and all ESA entitlement's, even if the worker is subcontracted or his hired through a temporary agency.

Later this spring, UFCW Canada will be fully participating in an Ontario government formal review of the province’s labour and employment standards, including better regulatory protection for people in precarious work.