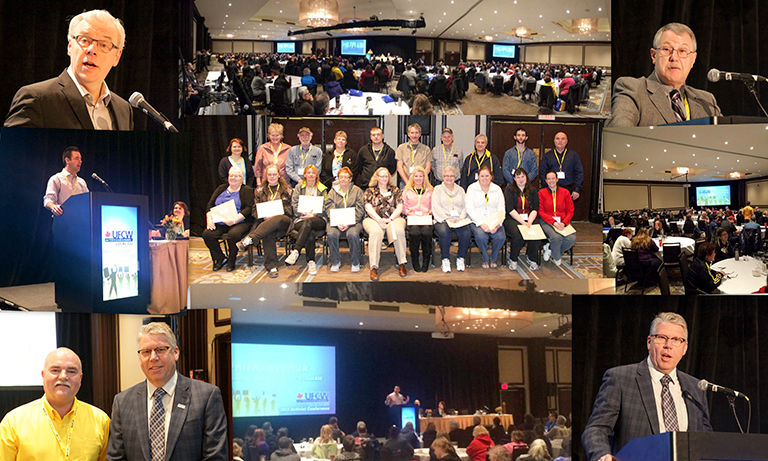 Winnipeg – April 9, 2015 – The UFCW Canada Local 832 Activists Conference, April 7-8, brought together more than 250 members from across Manitoba to build their strength and knowledge as stewards on the shop floor, and as activists in their communities.

UFCW Canada Local 832 President Jeff Traeger welcomed the activists to the gathering held in Winnipeg.  “Together, we can play a vital role in upcoming federal and provincial elections and that takes political action.  We have to rally our friends, families and neighbours to make sure we elect governments that believe in fairness and the rights of working people,” said President Traeger.

With a federal election set for this October, and the Manitoba election scheduled six months later, working to elect family-friendly and worker-friendly governments was a primary topic for most of the workshops and presenters, including National President Paul Meinema who joined the activists at the conference. “We can change the politics of this country for the better. We can change Canada for the better and you are an integral part of this,” said Brother Meinema. “In the months ahead, Canada needs each and every one of you to use your power and energy to defend our democracy here in Manitoba and across our great country. The corporate, ultra-Conservative, Right-to-Work-for-Less forces must be stopped.”

That message was reinforced by Carl Ariston, Field Campaign Coordinator, and Ron Mattock, National Field Director from UFCW International. Brothers Ariston and Mattock outlined the damage done by
Right-to-Work-for Less forces in the USA, and described what UFCW political activists have done in the U.S. to push back the attack on unions and the labour movement.  Some of the other presenters at the conference included Paul Moist, the national president of the Canadian Union of Public Employees (CUPE), as well as UFCW Canada national representatives Lily Olson and Michael Toal who led a Together Fairness Works workshop about the positive impacts of the labour movement on the broader community.

The final presenter at the two-day conference was Premier Greg Selinger, the leader of the Manitoba NDP and government. Premier Selinger thanked Local 832 for and its activists for their long time support for the NDP — helping elect an NDP provincial government to four consecutive terms over the past 15 years. The next Manitoba provincial election is tentatively scheduled for April 16, 2016.