Are you prepared for the next federal election? 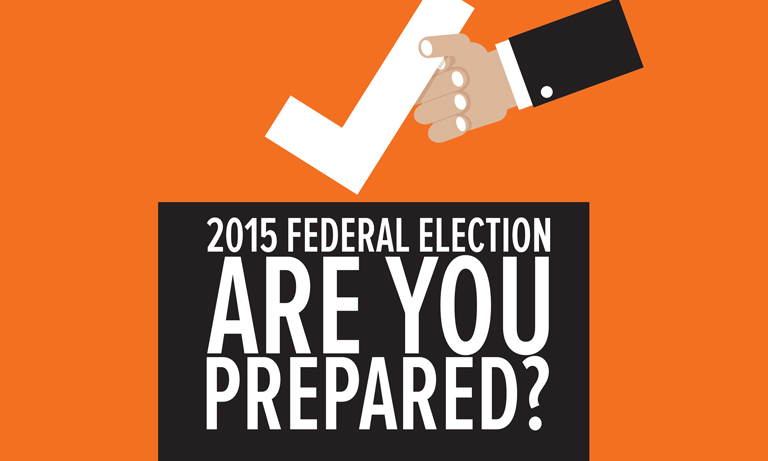 Ottawa – March 18, 2015 – With a federal election currently slated for October 19, 2015, voting is likely the last thing on Canadians' minds at the moment. At a time when we have the option to watch fictional U.S. politicians murder each other on House of Cards, or to cheer on the creation of a new U.S. government while fighting off the zombie apocalypse in The Walking Dead,  who needs or would even want to worry about what is being said by politicians at home? Yet from the far reaches of our minds, there is still that small voice of reason or concern that pushes us to find out what’s happening locally or nationally in the news.

As some of us finally tune into the news, we find much of the “doom and gloom” we saw on our favorite dramas.  With a strategy of fear, we see that terror, war and scandals are also main plots on our national news.  Yet there is so much more issues at stake and affecting the lives of Canadians directly. UFCW Canada is urging members and all Canadians to push beyond the doom and gloom talk, into the very pertinent issues affecting us all.  This election could prove to be a pivotal moment in our country’s history as we decide its direction for the next four years.

Just to highlight a few, there are four major issues already on the table for discussion.

Good Jobs and the Economy: Recently, a CBC town hall broadcast, Just-in-Time Jobs, claimed that half of those employed in the Greater Toronto and Hamilton areas were part-time workers.  With part-time, precarious employment on the rise in Canada, are you prepared to base your vote on this issue?  Do you know what political parties are saying about this issue?

Retirement Security: Half of Canadians don’t have access to a pension plan. The Canadians that do have pension plans have watched them get eaten away by recent recessions and market falls. We could begin to fix this by increasing CPP benefits, yet the current government is on record as saying “now is not the time to increase the CPP.”  Are you prepared to base your vote on this issue?  Better yet, are you prepared to have your parents move into your house or you move in with your children?

Health Care: A strong majority of Canadians already support our universal health care system. However, are you aware the current Conservative government is removing $36 billion of federal funding from our health care system? Most Canadians are not aware of this cut. Are you prepared to base your vote on this issue?

Child Care: In Canada, almost 70 percent of mothers with children under five are working. Yet there are only enough regulated child care spaces for about 20 percent of these children. Isn’t it about time we looked at a National Child Care system for Canada? Are you prepared to base your vote on this issue?

Over the next few months, UFCW Canada plans to continue highlighting these issues as we get closer to the next federal election. It is our hope to find out what our politicians are saying on these issues, so that before the campaigners reach your doorstep asking for your vote, you will have some time to consider the issues affecting your home the most. Together we will find the leadership this country needs.