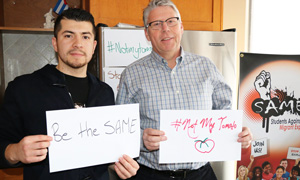 What started out as a small group of students from Carleton University and their desire to create awareness on the plight of migrant workers in Canada, has today grown into one of the country's most recognizable student organizations.

Throughout its existence, S.A.M.E. has spoken directly to at least 50,000 students face-to-face, while managing to engage over half-a-million through its award-winning use of social media.

Over the years, S.A.M.E. has worked in dozens of communities across the country, and alongside numerous renowned artists, community leaders, and educators. The organization has established over 50 active chapters in different schools, universities, colleges and community spaces. While primarily focused on migrant worker justice, S.A.M.E.'s work has transcended the labour movement and has helped motivate and inspire young people across Canada.

"S.A.M.E. is more than an organization, it is an idea and a belief, a belief that students everywhere are waiting to become active and engaged in social justice issues," says S.A.M.E. co-ordinator Pablo Godoy. "Given the right opportunity, young people are capable of greatness. S.A.M.E. truly is a testament to the hard work, dedication and activism of the young students we have reached."

"S.A.M.E. has been working hard over the last five years to educate youth through presentations on the struggles faced by migrant workers in Canada," says UFCW Canada National President Paul Meinema. "The group has grown into Canada's leading student movement to engage youth on migrant worker and labour rights issues, not only through visits to facilities but through social media as well," Brother Meinema adds.

Today, S.A.M.E. continues to help organize chapters and volunteers across Canada. The organization hosts yearly motivational speaking tours and has started its own scholarship program, in addition to launching the tremendously successful #NotMyTomato campaign. Visit facebook.com/samegroup to find out more.