Walmart's expansion is about profit, not people 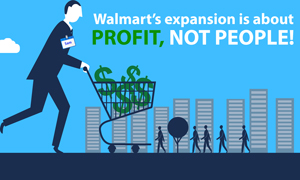 Toronto – February 18, 2015 – By next January, Walmart will have 396 locations in Canada in a move that is more about corporate greed and capitalizing on Target's departure from Canada, rather than creating good retail jobs.

Earlier this month, Walmart announced its plan to take advantage of Target Canada’s departure by investing $340 million into the construction and expansion of its stores.

If they keep to past practices, in order to cut costs, Walmart will be using their employees, regardless of age to set up the retail space after construction. This includes setting up heavy shelves for merchandise to be displayed on and providing employees with no construction training at all, leaving workers vulnerable to injury.

The expansion is a business move intended to only increase profit for the company. In 2014, it is estimated that Walmart generated $23 billion in sales while giving workers minimal hours and paying slightly above minimum wage.

UFCW Canada is the only union to have successfully achieved a collective agreement for Walmart workers in Canada. As the leading voice for retail workers, UFCW Canada has also won Supreme Court cases against Walmart.