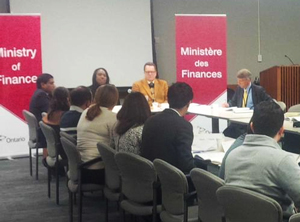 Toronto – February 9, 2014 – UFCW Canada has told the Ontario government that the province’s proposal for a new, government-administered workers’ pension plan must be part of a bigger plan to create good jobs and raise the standard of living for all workers in Ontario.

The Ontario Liberal government is currently conducting roundtable consultations with various stakeholder groups across the province, regarding its proposed public Ontario Retirement Pension Plan (ORPP). The plan would require all workers in the province without a company pension plan, to contribute 1.9% of annual earnings into the publicly managed pension fund. Employers would have to match the contribution. Currently, two-thirds of Ontario workers do not have a workplace pension plan.

“Retirement security must be a public policy priority, and any new pension plan by the government should be universal like the CPP,” says UFCW Canada national representative Pablo Godoy, who recently joined other young worker advocates who were asked by the government to participate in one of the recent ORPP roundtables. “We told the government the proposed ORPP could be a help, but only to those who are working, so what governments also have to look at are programs that support the creation of good jobs and greater economic equality.”

With young adults facing record unemployment and student debt, “it’s hard to think about saving for a pension,” says Brother Godoy. “Job creation also must be part of a government’s plan to help provide a secure retirement.”