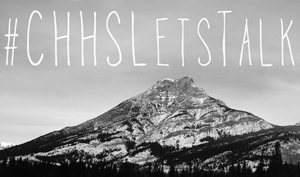 The campaign was designed to raise both awareness and funds around mental health by having members of the community and beyond tweet using the hashtag '#CHHSLetsTalk'.

UFCW Canada Local 401 leadership pledged to donate $0.05 for every re-tweet and share their post on social media generated to the Canadian Mental Health Association. The union also took the extra step of topping up their donation of $500 to the campaign to show its support for the students' outstanding efforts.

"We were really excited about the prospect of supporting this campaign," said UFCW Canada Local 401 President Doug O'Halloran. "We know firsthand how great the students at Crescent Heights High School are through the youth outreach program we run at the school."

"Having UFCW 401 on board means the absolute world to me and my committee," said student organizer Brett Rothery. "This campaign has the potential to save and improve the lives of many Calgarians and Canadians. The union's donation is extremely appreciated and will go to a very deserving organization that has helped so many people."

UFCW Canada Local 401 represents more than 30,000 members in a variety of industries across Alberta.