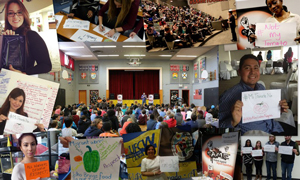 Toronto – January 8, 2015 – Students Against Migrant Exploitation (S.A.M.E.) had a busy 2014, with plans to extend reaching out and engaging students all across Canada in 2015.

The York University chapter has raised hundreds of dollars, which will go towards buying bicycles and health and safety equipment for workers this upcoming season. Chapter President Nathalie Vengal was awarded the Identify N' Impact Youth award in Equity and Diversity from the City of Toronto, for her work with S.A.M.E. and LGBTQ youth at the Center for Spanish Speaking People.

"Our goal is educate and empower students and educators alike by providing information on migrant exploitation," says S.A.M.E. co-ordinator Pablo Godoy. "A lot of our outreach work consists of meeting with student groups to discuss how they can get involved with the issue."

S.A.M.E. also plans to build on its successful 2014 social media engagement efforts, like the #NotMyTomato campaign, which has been endorsed, shared and tweeted by thousands of supporters. The group has also been working with the Canadian Federation of Students, and is helping the Ryerson Students’ Union develop their policies to support temporary foreign workers in Canada.

Since its inception in 2009, S.A.M.E. has grown into Canada's leading student social justice movement to empower and engage youth on migrant worker and labour rights issues. If you, your school or campus would like to get involved in the S.A.M.E 2015 tour, or want more information on volunteer opportunities, please contact [email protected]