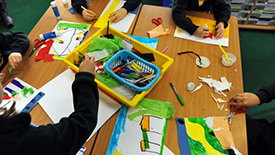 Ottawa – November 13, 2014 – Recently, NDP Leader Thomas Mulcair announced his party’s plan to create one million affordable childcare spaces across Canada. The goal of this plan is to ensure parents don’t pay more than $15 a day for a childcare space.

“Moms and dads across Canada work hard and sacrifice every day to ensure their kids get the start they need,” said Mulcair. “But in the last nine years under Stephen Harper, parents have seen their childcare costs go through the roof. It’s time parents got a break.”

Mulcair explained that the NDP's plan would build on the successful childcare model from Quebec. Research from economist Pierre Fortin shows that affordable childcare in Quebec helped 70,000 mothers join the workforce and boosted the economy by $1.75 for every dollar invested by the government.  The Quebec program has more than paid for itself by boosting the employment rate of women and thus Quebec's GDP and tax base.  In line with many earlier studies, on the overall rate of return from public investment in high quality child care and early learning programs in Canada, the Centre for Spatial Economics estimates that the rate of return would be $2.54 for every $1 spent.

UFCW Canada is a strong supporter of a government funded, universal child care program. Only a fraction of families who need childcare have access to a regulated full or part-time child care space. The argument for universal childcare is based on statistics showing the immense positive effect such a program will have on our Canadian economy. The Harper government’s recently announced boost to the universal child care benefit, making it $160 a month per child, barely addresses the inaccessibility of the childcare system for working families. The majority of working families are spending at least 30% of their income on childcare, and continue to struggle with the economic challenges including available and affordable quality childcare. Unlike the Harper plan, the NDP plan would truly benefit working families and their children.

UFCW Canada is committed to advancing this issue by participating in the ChildCare2020 Conference happening in Manitoba. For more information on the conference please visit: www.childcare2020.ca