International Day for the Eradication of Poverty – October 17 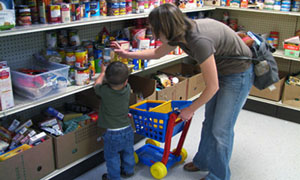 Toronto – October 14, 2014 – On October 17, 1987, over 100,000 individuals gathered in Paris, France to proclaim that poverty is a violation of human rights. Many demonstrators, coming from impoverished conditions, took to the streets to demand that their voices be heard. Many countries followed suit and went on to observe October 17th as an annual day to honour those living in conditions of extreme poverty and violence. In December 1992, the United Nations (UN) General Assembly officially declared October 17th as the International Day for the Eradication of Poverty.

For 2014, the UN theme for the Day is "Leave no one behind: Think, decide and act together against extreme poverty." Globally there are 1.2 billion people living in extreme poverty, and in Canada roughly 833,098 people accessed food banks in 2013. The Food Banks Canada Report also says that one in five people who rely on food banks are children. This is hard to imagine given that Canada is a developed country, but it is true.

We know that income inequality is rising in this country as union density declines, and that increased unionization will be crucial to reducing poverty going forward. After all, unions have played – and continue to play – a major role in building the middle class in Canada. Accordingly, October 17th is about demanding poverty prevention policies and strengthened labour rights from our federal and provincial governments, instead of ad hoc measures that do not properly address poverty and its related effects.

On this International Day for the Eradication of Poverty, let us renew our commitment to end poverty in our communities. As the leading voice for workers in this country, UFCW Canada is committed to electing governments that employ concerted strategies to reduce poverty in Canada, as we can no longer ignore this gravely important issue.