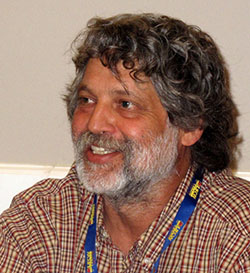 Red Deer, Alta. – October 10, 2014 – For more than three decades, Albert Johnson was an activist, member, and for the past 28 years, the president of UFCW Canada Local 1118. Throughout, he was a tireless and unwavering champion of workers’ rights and deeply loyal to the members he represented. When Albert suddenly passed away on October 3, he was the longest-serving, current UFCW Canada Local Union President in the country, and a trailblazer who broke new ground in extending opportunities for the membership, no matter where they came from.

Brother Johnson joined the UFCW Canada family in 1982 when he was hired at the Fletchers packing house in Red Deer Alberta. “From the get go, Albert was always there to back up his fellow workers,” says National President Paul Meinema, who first met Albert in 1984 as a co-worker at Fletchers. “He had a big heart and real commitment that fairness was worth fighting for.” In 1986, at the age of 24, Albert Johnson was elected President of Local 1118. He was re-elected every term since as he grew the membership from just 400 members to more than 5,000 members today, while leading the members successfully through some of the toughest strikes in Canadian labour history; growing the local union through organizing breakthroughs like at Cargill in High River; and welcoming five other UFCW Canada local unions in Alberta to merge their strength with Local 1118.

Brother Johnson also pioneered a new collective bargaining path that would change the future for thousands of newcomers to Alberta. He negotiated groundbreaking contracts that obliged employers to support a pathway to permanent residency for Local 1118 members who had arrived in Alberta as temporary foreign workers. Employer funding for English as a Second Language training was also part of the contract. Altogether, it opened the door for similar UFCW Canada contracts at other employers across the Prairies.

Albert Johnson also brought his pioneering spirit and total commitment to UFCW and the members as a Trustee and member of the Administration Committee of the National Defence Fund, a vice-president of the UFCW Canada National Council, and as a member of the UFCW International Advisory Board.

Just four days after Albert passed away, 100 new Local 1118 members at Trochu Meat Processors celebrated winning their vote to unionize. It had been a five-year campaign, and Albert Johnson had stood shoulder-to-shoulder with the Trochu workers throughout the organizing drive. “Albert’s compassion and dedication to working people was second-to-none,” says Brother Meinema. “All Local 1118 members were first on his list. Albert was totally dedicated and loyal beyond imagination to the members and their union. He was a fearless leader, a devoted family man, and a brother we will never forget. ”

For more on the life of brother Albert Johnson, please visit facebook.com/ufcw1118.