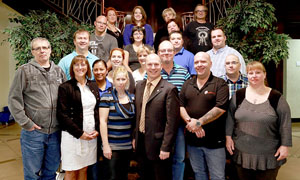 Montreal – September 29, 2014 – At a recent UFCW Canada Local 500 stewards' conference in Drummondville, François Choquette, the NDP MP member for Drummond, participated in a discussion about the role and duties of a Member of Parliament, as well as outlined the NDP's position on key issues facing workers and their families.

NDP MPs are regular guests at UFCW Canada Local 500 labour education sessions, where members can learn about the political issues that impact them as both workers and citizens.

During a question and answer round, Choquette was also asked to outline specific actions he had taken for the Drummondville region. Choquette described his participation in the preparations for the activities marking Drummondville’s 200th anniversary which start on December 31, 2014. Most of the festivities will take place in the historical Village Québécois d'Antan. He also outlined his involvement with the Centre de foires de Drummondville (an exhibit and convention centre); a major investment that will greatly enhance the region’s popularity. There has also been a major reinvestment of funds for Canada Day celebrations in the region, which means a comeback for this family event that always attracts large crowds and showcases local businesses.

“Every visit from NDP MPs at our training sessions is unique and provides an enriching and diversified experiences for our stewards,” says Antonio Filato, the president of UFCW Canada Local 500. "The participants always enjoy this political aspect of our courses."