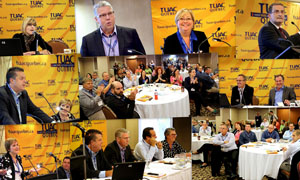 One principal theme of the meeting was mobilizing in solidarity for the upcoming 2015 federal election, and fighting back against the right wing, ultra-conservative, anti-worker agenda. UFCW Canada National President Paul Meinema, and Barry Sawyer, Executive Assistant to the National President were welcomed as key presenters at the gathering. Brother Meinema thanked the Quebec Council members and Local Unions for their proven strength in organizing, servicing, and mobilizing the membership. Brother Sawyer briefed the Council members on the status of political action mobilization plans across the country, including the upcoming National Political Action Conference in November.

A number of other guest presenters attended the Council, including political columnist Jean Lapierre, University of Montreal Industrial Relations Professor Melanie Laroche, and Daniel Boyer, president of the Quebec Federation of Labour.

"It was a very positive gathering, "says Brother Filato. "It had been a while since UFCW Local Unions in Quebec got together like we did for this conference. We are very pleased with the results. Staff representatives also took advantage of the occasion to talk about their work experiences among themselves and thus reinforce their sense of belonging within the UFCW family," says Brother Filato.

“We have a devoted and committed team in Quebec," said Sister Collet. "Working together we are more prepared than ever to meet the challenge ahead."