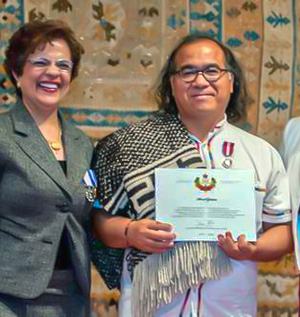 Raul Gatica, a long-time a human rights activist, staff member and past coordinator of the Agriculture Workers Alliance (AWA) centre in Surrey, British Columbia, has been awarded the Queen Elizabeth II Diamond Jubilee Medal for his outstanding commitment and contribution to the rights of migrant agricultural workers in Canada.

Marking the 60th anniversary of the reign of Queen Elizabeth II, the medal honours recipients who have shown through their passion and dedication how important it is to give back to their community, and to Canada.

Brother Gatica was nominated for the award by Senator Mobina Jaffer, who first met him at the centre. "I was impressed and inspired by his compassion and commitment to migrant agriculture workers in our community," said the federal Senator for British Columbia. "These men and women have left their homes and families, and Mr. Gatica has done a remarkable job defending their rights and offering them so much needed support."

Brother Gatica received the medal on September 8, at a ceremony in Burnaby, B.C. "I humbly accept this award as just one of many AWA brothers and sisters doing this important work," said Brother Gatica. "I am particularly grateful that we have earned the trust of the workers as their allies and friends in the community. This award is really for them."

In association with UFCW Canada, the AWA operates ten agriculture worker support centres across the country.