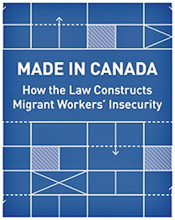 Toronto, ON - September 17, 2012 — UFCW Canada, Canada's leading union and long-time advocate for migrant workers' rights, endorses the recommendations and agrees with the findings of a new report from the Metcalf Foundation that lays out how current government policy is inadequate in preventing the exploitation and human rights violations of migrant workers in Canada.

The report, "Made in Canada: How the Law Constructs Migrant Workers' Insecurity", was based on comprehensive research and interviews by its author, Metcalf Innovation Fellow and Osgoode Hall Law School adjunct professor Fay Faraday. Faraday makes it clear that while the Canadian labour force is in desperate need of additional workers, the supports, programming, and services that are fundamental to a foreign worker program working efficiently are not in place.

UFCW Canada, through its 10 Agriculture Workers Alliance support centres across Canada, comes into contact with tens of thousands of migrant workers annually, and provides more services to migrant workers than any other organization in the country. Based on that experience, UFCW Canada confirms the report's bleak picture of a migrant workforce that is vulnerable, exploited, and kept that way by the denial of permanent status in Canada.

"No longer are our governments about nation building by ensuring that immigrants are welcome to come to Canada as permanent residents, pay taxes, have children and continue to build a country. Rather, as the Made in Canada Report points out, our governments are overly concerned with running the country as a corporation and thinking about the next financial quarter, as opposed to where we will be in 20 years from now," says Wayne Hanley, the National President of UFCW Canada.

"We know that the Temporary Foreign Worker Program, by not allowing workers to attain permanent residency, by having little if any enforcement mechanisms for what little protective legislation exists, and by allowing the pure commodification of migrant workers, is a program which in the long term is not viable or ethical."

"It has been clear to us for over 25 years that through the Temporary Foreign Worker Program, low waged migrant workers in precarious jobs face an unprecedented level of hardship whereby at almost every turn and every opportunity they are exploited, " says the UFCW Canada leader. "We know from our own research many migrant workers return to their home country in a worse condition than when they arrive."

"We endorse the Made in Canada Report recommendations, for it is clear they are in line with what Canada needs as a nation: a nation that is based on individuals coming to Canada, attaining permanent residency, and providing the skills and abilities we need to drive a just and fair economic system into the next century."

UFCW Canada is Canada's largest private-sector union with over 250,000 members from coast-to-coast working in your neighbourhood in the service sector, retail, hospitality, healthcare, financial services and manufacturing, and in every sector of the food industry from field to table.