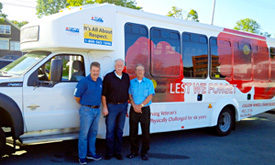 Halifax – September 15, 2014 – UFCW Canada’s Eastern Provincial Council has made a much-needed donation to the Walter Callow Wheelchair Bus service in Halifax, Nova Scotia. The service has existed since 1947. It provides veterans and persons with disabilities with recreational transportation and tours, using three specially equipped vehicles.

For a number of years, UFCW Canada member activists and staff in Atlantic Canada have supported this non-profit organization through various fundraising initiatives, including the Annual Callow Wheelchair Bus Golf Tournament. The recent donation provides funds for signage on the three vehicles. “It’s All About Respect” is the catchphrase which is now prominently displayed on the buses, reminding the federal government to respect Canada’s veterans and their families by providing the support and services they need.

“This is a great opportunity for our union to support a valuable service for our veterans in Atlantic Canada,” says Mark Dobson, UFCW Canada Eastern Provinces Regional Director, “With three Canadian Forces bases located in Nova Scotia, veterans are a big part of our communities. The buses not only provide an indispensable service, but also spread the word that veterans deserve our respect.”