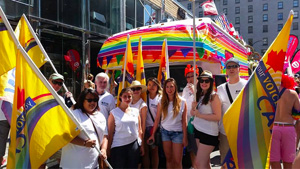 Vancouver – August 5, 2014 – Members, staff, and officers from UFCW Canada Locals 1518 and 247 were loud and proud the 2014 Vancouver Pride Parade on August 3rd, where UFCW Canada played a leading role as part of the multi-union delegation that participated in the Parade.

"Our union proudly stands in solidarity with the LGBTQ community, because we know that human rights and workers' rights are interconnected," said Suzanne Hodge, President of UFCW Canada Local 247.

"We are extremely proud of our diverse membership, and we will continue to fight to end homophobia and transphobia in the workplace," said Ivan Limpright, President of UFCW Canada Local 1518.

The Vancouver Pride Parade was recently granted civic status, and is now one of the city's flagship events. Organizers estimate that over half a million people attended this year’s Parade.