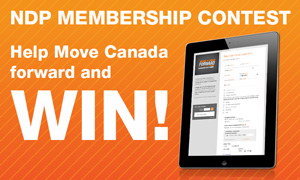 As members of Canada’s leading union, we cannot ignore politics because politics does not ignore us. We must act as a positive force for progressive change.

To help build our political voice, UFCW Canada has launched the 2014 New Democratic Party (NDP) Membership Contest, which challenges activists to sign up as many fellow UFCW Canada members to the NDP as possible.

The UFCW Canada activist who signs up the most UFCW Canada members to the NDP by the end of this year will win a free iPad! The winner will be announced in January 2015.

And at the end of the contest, UFCW Canada will also recognize the Local Union that signed up the most members during the contest.

Activists can download as many NDP application forms as they need to win the contest by clicking here.

Please ensure that all NDP membership application forms are sent to the UFCW Canada National Office at 300 – 61 International Blvd., Toronto, ON, M9W 6K4.

Good luck, and remember: Together we can build a better world!