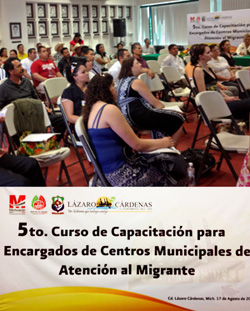 LAZARO CARDENAS, MICHOACAN, MEXICO — UFCW Canada recently strengthened its presence in Michoacán, Mexico through its participation at a conference for municipal functionaries in charge of servicing migrant workers from that state.

On August 17, UFCW Canada was invited to attend the 5th Training Session for Municipal Migrant Support Centers conducted by the Michoacán Secretary of Migrants. The conference was attended by representatives from most of the 113 municipalities in the State of Michoacán, and offered an intensive training session for public officials who are on the frontlines in matters of migration.

Andrea Galvez, liaison for UFCW in Mexico, delivered a presentation on temporary worker programs, labor rights and human rights within the context of the migrant worker experience in Canada.Because the municipal officials at the conference work closely with migrants and their families, the main objective was to insure the officials were aware of the conditions and pitfalls of temporary worker programs in Canada, as well as to facilitate information-sharing and mutual referrals between the Michoacán authorities and UFCW Canada. The conference participation comes as the latest step to strengthen the institutional relation and co-operation agreement between UFCW Canada and the government of Michoacán which has been in place since February 2009.

UFCW Canada is the country’s largest private-sector union and has led the fight for workplace rights and safety of migrant workers for more than two decades. In association with the Agriculture Workers Alliance (AWA), UFCW Canada operates ten AWA support centres across the country.