By the Numbers: Unions and Prosperity

The Economic Policy Institute of Washington, D.C. has released a new graphic and backgrounder that confirm what labour activists have long known: as union membership has steadily fallen in the United States, income inequality has risen to levels not seen since the 1920s.

The think tank's chart and analysis show that union membership grew dramatically after Franklin Roosevelt extended collective bargaining rights to workers in the 1930s. This ushered in a new era of shared prosperity in which the share of national income taken by the very rich was cut by one-third. The significant power of labour unions both at the bargaining table and in politics produced wage raises and improved working and living standards for unionized and non-unionized workers alike.

However, as unions came under attack from governments, the courts, and employers in the 1980s, falling union membership led to worsened income inequality - and this remains the trend today. The total share of national income going to the top 10 percent of Americans is now roughly 50 percent.

Of course, the link between declining unionization and a widening income gap is not exclusive to the United States. In Canada, approximately one in three private sector workers were union members in the late 1980s but today that number is under one in five. The result is that median earnings in Canada have increased by less than $45 a year since 1976. Meanwhile, the average pay of Canada’s highest paid 50 CEOs has skyrocketed to 219 times the pay of the average worker. It is unsurprising, then, that the message of Occupy Canada is resonating with workers across the country.

With the U.S. and Canada regressing to Depression-era levels of inequality, it is time for citizens, labour unions, and governments to make a renewed push toward achieving shared prosperity. By unionizing workers who lack representation on the job, and by electing governments that are committed to reducing poverty and the current income gap, we can restore the middle class in North America. 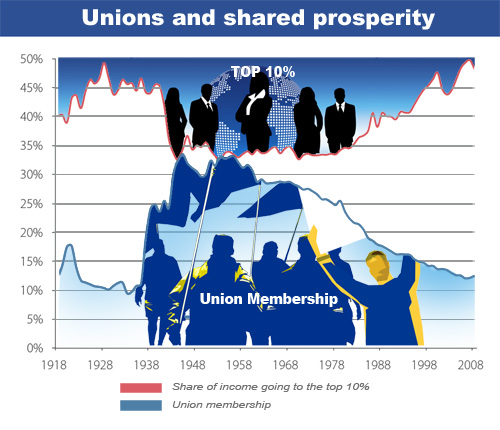