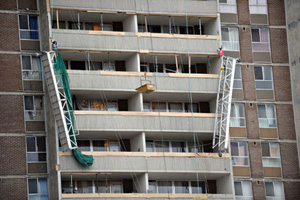 Toronto, ON - A monetary fine against a Toronto construction company found negligent in the 2009 death of four workers, with no jail time for the company's owner, "sends a message that for a few thousand dollars you can toss safety and the lives of workers aside", says Wayne Hanley, the National President of the United Food and Commercial Workers Union Canada (UFCW Canada).

The reaction from the leader of Canada's largest private-sector union comes in the wake of an Ontario court judgement that found Metron Construction of being criminally negligent in the 2009 Toronto Christmas Eve death of four workers and the serious injury of another, when they fell from a construction scaffold. An inquiry revealed the men had no safety harnesses, and had not received safety training.

While the company was found criminally negligent, charges of criminal negligence against the company's owner were dropped.

"While it is notable that for the first time ever an Ontario company has been found negligent under the Criminal Code in the death of a worker, it is also clear that negligence killed these men; yet, no one went to jail. The owner goes free, while the families will never be free from a tragedy that was completely preventable", says Hanley.

"Since 2004, Bill C-45, the Westray Act, has given courts the power to jail owners when workers are killed by a company's negligence. That should have happened here. Companies must see that if you kill a worker, you go to jail. Until then, Ontario workers will continue to be the victims of employers willing to gamble their lives and safety."