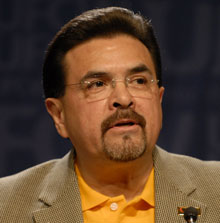 Recently, a United Latinos of UFCW committee of inquiry returned from a fact-finding mission in the agriculture area of the B.C. Lower Mainland. What the committee was told by workers and advocates supported allegations now in front of the B.C. Labour Board that the Mexico consular service in Vancouver had blacklisted some its own citizens working in Canada suspected of being union supporters.

The United Latinos of UFCW promote issues and opportunities important to UFCW Latino members. Its president, Johnny Rodriguez, is also President of UFCW Local 540 in Dallas, Texas and a UFCW International Vice President.

"During our inquiry we heard supporting testimony  from various civil society and labour groups,  workers' advocates, and most importantly from Mexican migrant agriculture workers themselves about reprisals by  the Mexican consulate against them for exercising their human and labour rights in Canada," says Brother Rodriguez, who led the committee during its three-day trip, as it traveled  to a number of agriculture communities in B.C. where Mexican migrant workers are employed under the Seasonal Agricultural Workers Program (SAWP).

Mexican migrant workers at two B.C. agriculture operations are members of UFCW Canada Local 1518, after a majority of the workers at each location voted to unionize. Currently there are now charges and evidence at the B.C. Labour Board that Mexico's Vancouver consulate colluded with the two agriculture operations to blacklist workers thought to be union activists. Evidence includes a leaked "blacklist", allegedly from the Vancouver consulate to the Mexico Ministry of Labour, to deny workers on the list the right to return and work at these farms.

The fact-finding mission also spoke with workers visiting the AWA support centres in Surrey and Abbotsford. "Many of the workers we spoke with told us they'd been warned by Vancouver Mexico consulate to avoid the AWA centres and refrain from any union activity if they want to be
rehired next season, said Brother Rodriguez. "We respect their courage, and the commitment of UFCW Canada and the AWA to fight to make sure that the human rights of workers are respected, no matter where they come from."

"We stand in solidarity with our UFCW Canada brothers and sisters in Canada, including those who come as migrant workers, to alert Mexico that denial of labour rights is a violation of human rights," said the United Latinos leader. "Blacklisting is a black eye to the Mexico consular service, and an assault on Mexican citizens who look to their government to protect their rights — not attack them."