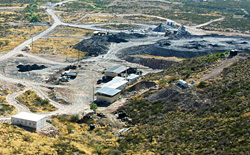 A group of workers and communal landowners at the La Platosa mine in Mexico have charged the mine's Canadian-owned operator with union busting and violating a contract to share revenue and protect the environment around the mine. The group came to Ottawa to file their complaint against the Canadian company Excellon Resources, just days before the annual meeting of the Canada-Mexico Partnership in Ottawa.

The group's complaint follows an earlier complaint lodged by the workers, which went unresolved after the CSRC — an agency created by the Harper government to monitor overseas Canadian mining companies — closed the complaint file last year after Excellon walked away from mediation. The CSRC mediation was meant to resolve the firing of union organizers and members at the mine; the dumping toxic wastewater and mine tailings; and Excellon's failure to live up to a revenue-sharing contract with the community landowners. Excellon was able to walk away from the agency's mediation because under the CSRC, company participation is voluntary.

"The Harper government created an agency that is all talk but no action in guaranteeing Canadian mining companies behave ethically, safely and legally when it comes to their mining and labour practises," says Wayne Hanley, the National President of UFCW Canada. "The CSRC is just a decoy to protect Canadian corporate mining interests. Both the Canadian and Mexican governments have authority to make Excellon toe the line in respecting the labour rights and the environment at La Platosa and that must happen."

"The Canada-Mexico Partnership cannot just be a cheerleader for corporate interests," said the UFCW Canada leader. "Both governments should respect that human and labour rights are compulsory, not voluntary, in both Canada and Mexico."