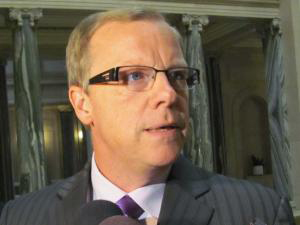 UFCW Canada Locals 1400 and 248P are denouncing the Saskatchewan Party government's effort to fast track consultations with the public and interested stakeholders on sweeping changes to 15 pieces of labour legislation. Even though the overhaul would affect every worker in the province, Premier Brad Wall and Labour Relations Minister Don Morgan are only providing citizens and organizations with 90 days to submit their ideas for change on everything from collective bargaining for healthcare to workplace safety to the minimum wage.

"A three-month consultation period for a complete overhaul of labour legislation, some of which has been in place since Tommy Douglas was in office, is completely unfair and unreasonable," says Local 1400 President Norm Neault.

The government announced its intention to reform the province's labour standards by releasing a Consultation Paper on the Renewal of Labour Legislation in Saskatchewan earlier this month. According to Official Opposition Leader John Nilson, the Saskatchewan Party is likely using the swift consultations to disguise its plan to attack unions and the province's hard-won labour laws. "The premier is trying to sell his sweeping review of labour legislation as a consultation but it's clear he's already made up his mind on what the coming legislation will look like," Nilson told the Regina Leader-Post.

The Consultation Paper asks citizens whether workers who are experiencing financial hardship should be able to opt out of union dues, and Wall has said his government is considering exempting entire groups - including teenagers - from paying such fees. The Saskatchewan Party is also considering whether to allow decertification applications every month instead of once a year and whether employers should be able to increase the 40-hour work week without written permission from the province.

“Many workers already put in exhausting overtime hours, even under the present legislation. To remove the laws that require overtime pay after 40 hours and afford workers time with their families is certainly a step backward," says UFCW Local 248P President Maurice Werezak. “This seems to be another example of the Wall government's distain for union members and their right to bargain collectively. The pendulum of justice is moving further away from the average worker and into the hands of multi-national companies," adds Brother Neault.

Locals 1400 and 248P will be further reviewing the Consultation Paper with the hope of engaging the government in meaningful dialogue and will continue to keep the public and UFCW Canada members informed about the situation as more details emerge.