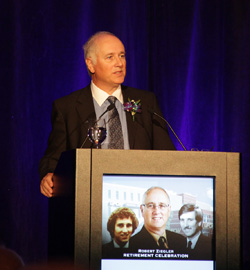 Brother Ziegler retired last October, after leading Local 832 as president for nine years.  Altogether, he had served Local 832 members for 32 years as a steward, representative, negotiator, secretary-treasurer, and ultimately president of Manitoba's largest private-sector local union with more than 15,000 members. Before working for the local union, Brother Ziegler had worked at Empress Foods (now Lucerne Bread) in Winnipeg.

“Over the past three decades I've been fortunate and inspired to have worked with so many brothers and sisters devoted to making life better for the membership and everyday families in Manitoba. I'm humbled and honoured that many of you are here tonight," said Brother Ziegler, "and I'm proud of what we accomplished together."

Some elements of President Ziegler's legacy are the groundbreaking collective agreements — translated into multiple languages — that Local 832 has negotiated with employers who recruit temporary foreign workers, which provide the workers a pathway to permanent citizenship. During his presidency, Local 832 also expanded its training centre in Winnipeg, as well as adding two additional centres in Brandon and Neepawa.

In addition to his role as president, Brother Ziegler has also served since 1991 as chair of the Pension Commission of Manitoba; co-chair of the Premier's Economic Advisory Council; and a member of the provincial Labour Management Review Committee.

"Robert, the respect you have from your staff, your UFCW colleagues, other labour movement leaders, politicians, professionals and adversaries not only speaks to friendships and relationships you made, but makes a statement and shows something about who you are as a person," said National President Hanley at the Winnipeg gathering.

"UFCW Canada members in Manitoba were in good hands under your leadership. On behalf of UFCW Canada, our Local Unions and membership, and me personally, I wish you a long and happy retirement. You have earned it and deserved it."