East Side Mario's Workers Say Yes to the Union 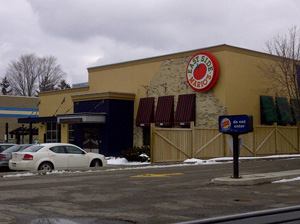 UFCW Canada Local 206 is excited to welcome 39 new members at the East Side Mario's on Upper James Street in Hamilton, Ontario. Following a successful organizing campaign in January 2012, the restaurant employees voted unanimously in favour of joining the union and a collective agreement is currently being negotiated.

Local 206 organizer Joe Blythe says the East Side Mario’s workers decided to join the union because of concerns regarding intimidation in the workplace, a lack of job security, insufficient rest periods, and a requirement to allocate tips to managers.

"We commend the East Side Mario's workers for taking a stand to improve their employment standards by voting for the union," says Local 206 President John Hurley. "Our local is constantly striving to increase its density in the highly non-unionized restaurant sector because workers in this industry desperately need a collective bargaining agent that can stick up for their rights."

Local 206 represents restaurant employees at various Swiss Chalets, hotels, and airports throughout Ontario. The local expects the East Side Mario's contract to be fully negotiated and ratified by spring 2012.