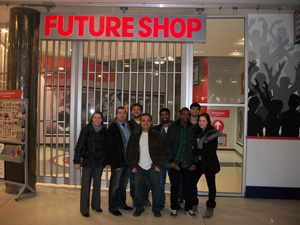 A group of retail workers in Quebec are in the midst of making labour history by becoming the first Future Shop employees to overwhelmingly support the union.

The 80-plus workers at the company’s old Montreal Forum location are poised to become the newest members of UFCW Canada Local 500 following a strong, worker-led campaign that resulted in nearly every employee signing a union card. Quebec is one of the few jurisdictions left in Canada that maintains card-check certification, which recognizes the right of workers to automatically join the union after signing a certain amount of certification cards.

Activists report the Future Shop workers contacted Local 500 after the company unilaterally decided to significantly change their working conditions. The workers are especially concerned about a company announcement that calls for pay cuts of up to $5 per hour along with imposing lower commission rates.

"We are pleased and proud to welcome the workers from Future Shop into the UFCW family,” says Local 500 President Antonio Filato. “They have chosen to join an international union in order to improve their balance of power. They will now be able to protect their working conditions to the fullest extent possible and will be able to negotiate with their employer.”

The success of the campaign has inspired other Future Shop workers at different locations in Quebec, with at least three additional stores set to follow the courageous lead of their Brothers and Sisters at the old Montreal Forum store.