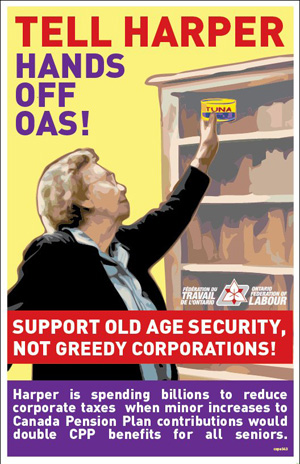 Labour activists teamed up with seniors, retirees and supporters on February 9 to occupying 21 Tory MP offices across Ontario, while other actions are taking place elsewhere in Canada. The Harper government’s recent threat to cut Old Age Security (OAS) benefits has inflamed a new movement of workers and pensioners, calling itself a movement of “Blue-Grey Power,” that is bringing the fight against the Conservative assault on retirement security directly to Tory constituency offices.

“Prime Minister Harper’s hypocrisy is stunning. He chose to announce his plans to cut Old Age Security in front of the one percenters in Davos, Switzerland when he knows full well that if he were to retire in 2015, he would have a Platinum-Plated, taxpayer-funded pension of $223,517 a year,” said OFL President Sid Ryan, from the sit-in at Finance Minister Jim Flaherty’s Whitby constituency office.

Feeling pushed to the brink, the outraged pensioners, soon-to-be pensioners and supporters resorted to the constituency office occupations to demand that Conservative Members of Parliament abandon plans to push back the OAS eligibility age from 65 to 67, or make any reductions to benefits. Instead, they are calling for the Harper government to introduce modest increases to Canada Pension Plan (CPP) contributions that would double benefits for all retirees and seniors.

“Harper’s attack on retirement security is another example of the Conservatives putting ideology over reality and the interests of working families,” says UFCW Canada National President Wayne Hanley. “Even the government’s own Parliamentary Budget Officer, Kevin Page, has said that the pension system’s long-term sustainability is sound. We as workers in Canada need to take note of this most recent attack on our rights and standard of living, and mobilize to once and for all elect a government that works for working families.”

To find out more about the occupation, go to www.ofl.ca.