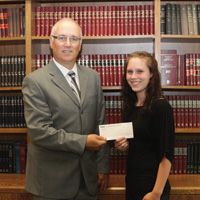 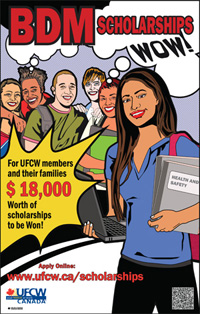 Every year, UFCW International awards one $8,000 scholarship to a Canadian member or their dependant. The recipient is chosen from dozens of applications received from across Canada.

Shelby Guenette (pictured left) was recently presented with the prestigious International Scholarship by former Local Union 832 President Robert Ziegler. Shelby works at Safeway 719 and is currently attending the University of Winnipeg where she is completing a Bachelor of Science and an undergraduate degree in Education.

Applications for the 2012 International Scholarship are now open, and all UFCW Canada members who are in full-time post-secondary program are strongly urged to apply before this year’s deadline on April 16. Click here to read the rules and regulations, and click here to apply.

UFCW Canada offers 18 annual scholarships of $1,000 each to members and their children for post-secondary education. Allocated by the Ontario, Quebec, Western Canada, and Atlantic Canada regions, these awards are named as a lasting tribute to three past leaders of our union: William Beggs, Fred Dowling, and Roméo Mathieu. 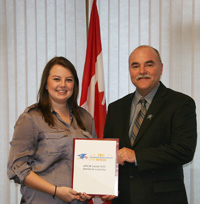 One of this year’s lucky winners was Stephanie Lacoste (pictured left), who is studying business at the University of Winnipeg. Sister Lacoste works at Superstore 1508 and has been a member of Local 832 for over two years.

"I would like to congratulate Shelby and Stephanie on winning these awards," says Jeff Traeger, President of Local Union 832. "UFCW's commitment to education has given hundreds of union members and their children the opportunity to reach their educational goals." 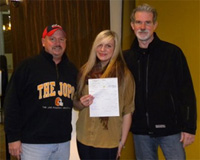 In Ontario, Ash-Lee Gibson (pictured right) won a BDM scholarship that will help pay for her enrolment in Brock University's Psychology program. She is the daughter of Richard Gibson, a long-time steward for Local Union 12R24. Upon graduating from Brock, Ash-Lee would like to pursue a career in helping young girls overcome eating disorders. "I want to inform girls that they are not alone in their struggles; that there is always a light at the end of the tunnel," she says.

Stay tuned to DIRECTIONS for further profiles of BDM Scholarship winners in the coming weeks. In the meantime, a full list of all recipients can be found here.