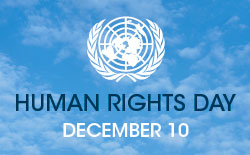 The human right to a fair and just workplace is specifically addressed by Article 23(4). It states all workers have the right to form and to join trade unions for the protection of their interests. The principle that labour rights are human rights is one of our guiding principles as Canada’s largest private-sector union. For instance, our continuing struggle to uphold the rights of our migrant sisters and brothers draws on both the Declaration, and Canada's Charter of Rights and Freedoms, which under its Section 2(d) stipulates the right of Freedom of Association. Despite a setback for the labour rights of Ontario farm workers caused by a recent Supreme Court decision, it has not deterred UFCW Canada’s commitment to bring justice, dignity and the right to unionize to all migrant and domestic agriculture workers. Our Agricultural Workers Alliance (AWA) is now more than 10,000 members strong and growing, and the struggle continues to ensure that equal protection is extended all agriculture workers in the years to come.

Human rights, under Section 15(1) of the Canadian Charter of Rights and Freedoms, also include the right to the equal protection and equal benefit of the law without discrimination and, in particular, without discrimination based on race, national or ethnic origin, colour, religion, sex, age or mental or physical disability. This year, as an inclusive union we continue to embrace this principle by advancing awareness and activism within UFCW Canada Local Unions regarding the equity challenges faced by Aboriginal and LGBTT2Q members in the greater community. We do this work with two of our national community partners, First Nations Child and Family Caring Society (FNCFCS) and Egale Canada, to increase awareness on how to protect the rights of Aboriginal and LGBTT2Q workers.

Each December 10,International Human Rights Day reminds us as activists that the struggle for equality and dignity is the foundation of social justice, and that the fight for labour rights as human rights is the core of solidarity.