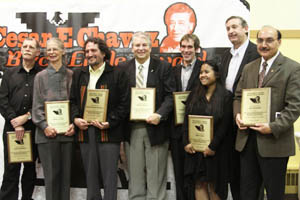 More than 300 activists, allies, and UFCW Canada and AWA staff and officers recently gathered in Toronto for the 12th Annual César E. Chávez Black Eagle Awards.  The Awards honour long time activists who have carried on the legacy of César Chávez by advancing the cause of justice for agriculture workers.

"César Chávez once said that the role of the activist was to educate, inspire and empower," said National President Hanley, who hosted the event held at the Ontario Federation of Labour building in Toronto.  "Since the inception of these awards 12 years ago, we have been honoured to recognize individuals who have met and exceeded this call of duty. Tonight we honour eight such individuals."

Gary Doer, the former NDP Premier of Manitoba, was honoured in the International category for spearheading legislation in that province to extend coverage of the Employment Standards Act to cover agriculture workers. Brother Doer (now Canada's ambassador to the USA) was also instrumental as Premier of Manitoba in crafting the only legislation in Canada that protects migrant workers against unscrupulous recruiters.

In the Religious category, Father Hernán Astudillo, the spiritual leader for San Lorenzo Church and Latin American Community Centre in Toronto was honoured for his ongoing outreach and work to migrant agriculture workers in Ontario. Throughout the season, Father Astudillo travels extensively to meet with workers. 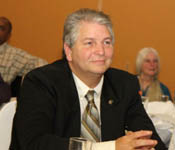 Pierre Gingras, the past-President of TUAC Canada Local 501 was honoured in the Labour category. Under Brother Gingras' leadership, Local 501 helped organize a number of TUAC Canada agriculture bargaining units in Québec. In accepting the award, Brother Gingras paid tribute to Patricia Perez — the first co-ordinator of the AWA Centre in St. Remy, who was also instrumental in the early organizing efforts.  She died in 2007. "Patricia Perez was like a sister to us," said Brother Gingras. "We met in 2001, and she explained all the problems facing the workers on the farms.  We began a campaign together, and today we have 10 bargaining units, as we continue her legacy to help the workers." 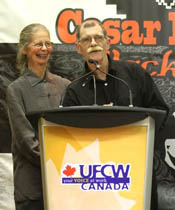 Long-time labour activist-artists Carol Condé and Karl Beveridge were honoured in the Cultural category. The plight of agriculture workers has often appeared in their precisely staged, photomontages, including  Salt of the Earth, which was produced with the assistance of UFCW Canada and the AWA. The couple are the focus of new Canadian documentary film, Portrait of Resistance. 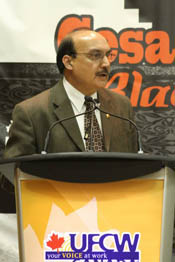 Raj Chouhan, the NDP MLA for Burnaby-Edmunds was honoured in the Politics category. Brother Chouhan arrived in Canada in 1973, where as a farm labourer he experienced first-hand the exploitation of agriculture workers. In 1980, he went on to become the founding president of the Canadian Farmworkers Union. In 2005, Brother Chouhan entered BC politics and was elected an NDP MLA. He is currently the NDP opposition labour critic. 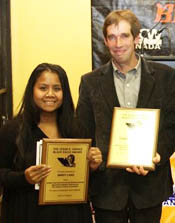 Mindy Leng and Thomas Dunmore were honoured in the Agriculture Worker category for their courage to stand up and fight for the rights of Ontario agriculture workers to unionize. Brother Dunmore worked at Highline Farms, where in 1994 workers unionized with UFCW Canada. In 1995, their certificate was revoked by the newly-elected Harris government. Brother Dunmore was named as the appellant in a successful landmark UFCW Canada Charter challenge of the Harris action, which in 2001 upheld the right of farm workers to organize. Ontario's response was legislation that still banned farm unions.  Two years later, in 2003, Mindy Leng led an organizing committee at Rol-Land Farms where a majority of workers also voted to join the union. But the McGuinty government challenged that all the way to the Supreme Court. Last April, the court shamefully let down Ontario agriculture workers by allowing Ontario to continue its farm union ban but the spirit of Sister Leng and Brother Dunmore remains unbroken.

"It's been a twenty year fight. It's been a long run and I want to see everyone stick together.  That's the only way we can do this," said Brother Dunmore as he accepted his award from National President Hanley.

"From 2003, right up until the Supreme Court decision I realized that the fight for collective bargaining is far from over," said Sister Leng. "My concern for the future is for justice, not just for myself, but for all farm workers who are in this together."

"Cesar Chavez understood that La Causa — the Cause — would be a long and difficult struggle, but he never lost faith that the struggle would bring a better future," said the national president to the Black Eagle gathering. "Thank you all for your continued support to create a future of justice and human rights for all agriculture workers in Canada."