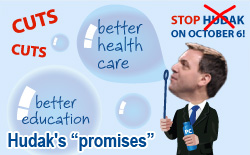 UFCW Canada is mobilizing 100,000-plus members across Ontario for the province’s upcoming election. From now until Election Day on October 6, UFCW Canada is calling on all activists, friends and supporters to do everything they can to stop PC Leader Tim Hudak from imposing another Mike Harris style of government on working families.

“As workers, we must do everything we can between now and October 6 to Stop Tim Hudak and his PC party from forming the government in Ontario,” says UFCW Canada National President Wayne Hanley. “Hudak’s extreme views are just like the ones we saw in Ontario during the Mike Harris years, and they are just like the ones we’re seeing today in Wisconsin and other American states. As workers we can’t let this kind of backward politics to spread from state to province and it’s up to us to fight for a government that put the interests of working families first.”

To help activists join the growing campaign to Stop Hudak, UFCW Canada has launched a new website to help spread the truth about the PC Leader and his ultra right-wing agenda.

Activists can also get weekly news updates about the Ontario election campaign by signing up for the e-bulletin Politics NOW!